Mott has been Australia women’s coach since 2015

The 48-year-old has overseen his native Australia’s dominance of the women’s game as holders of the Ashes and both the T20 and 50-over World Cups.

Mott has also had a spell in county cricket in charge of Glamorgan and with Australian side New South Wales.

He will work alongside new Test coach Brendon McCullum as England split their leadership roles across the formats.

“It was always going to take something special to leave the role that I have loved for the past seven years with the Australian women’s team,” said Mott.

“However, I genuinely believe that the time is right to play a role in helping the England men’s ODI and T20 group continue to evolve as one of the best teams in the world.”

His first series will be a three-match one-day international tour of the Netherlands starting on 17 June, before Twenty20s and ODIs against India and South Africa later in the summer.

The 2022 T20 World Cup starts in Australia in October while England will defend their 50-over world title in India next year.

England’s managing director Rob Key said it was a “real privilege” to appoint Mott, describing him as having been “outstanding” during the interview process.

“We are lucky to be able to appoint a head coach that has not only been involved in international cricket for the last few years but has also worked in franchise cricket around the world,” said Key.

“More importantly, what he has done with the Australian women’s team is what will be asked of him to achieve for our men’s white-ball sides.”

Who is Matthew Mott?

Mott, who had a solid first-class career as a batter in his home country, led Australia women to two T20 World Cups after taking over in 2015 – they were runners-up in the other in 2016 – and earlier this year added the 50-over crown.

Between 2018 and 2021, Australia went on a 26-match match winning run in ODI cricket – a record in men’s and women’s internationals.

They were unbeaten in four Ashes series under Mott, each contested with the Test, ODI and T20 formats combined, and beat England in this year’s contest without losing a match. 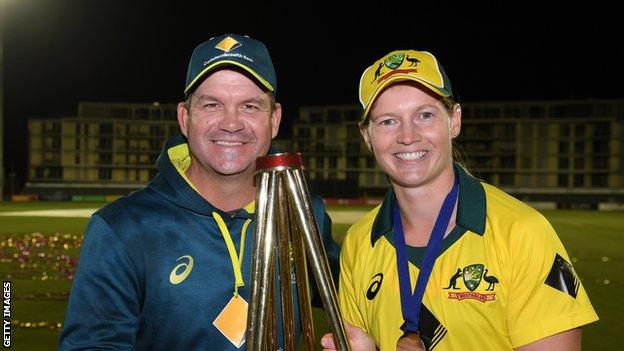 After retiring from playing in 2004, he began his coaching career with New South Wales in 2007, winning the first-class Sheffield Shield in his first season and leading them to victory in the Champions League T20 tournament in 2009.

He coached Glamorgan between 2011 and 2013 and reached the final of the domestic 40-over competition at Lord’s in his final campaign.

Mott was assistant coach at the Kolkata Knight Riders in the 2008 Indian Premier League where he worked with McCullum.

McCullum subsequently recommended him for the role as New Zealand coach, though Mott turned down that post to extend his New South Wales contract.

Spinner Alex Hartley who played against Mott’s Australia for England:

Australia are quite possibly the best sporting team in the world.

They have been so successful for many years and, with England being the best men’s white-ball team in the world, it will be an opportunity for him to implement some of the things he has taught to this dominant Australia side.

He manages players really well. He has created this unbelievable Australia side where they are almost unbeatable. He has a lot of talented players but manages them really well and gives them confidence.

That is the same role he would play with England men’s team. The talent is there, it is about getting the best out of the players in different situations. Yuzvendra Chahal (left) has taken 55 wickets with an average of 24.34…